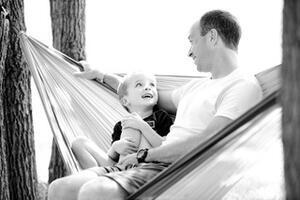 I was listening to Shankar Vendentam’s podcast  Hidden Brain  earlier this week. The episode,  Baby Talk  , centered on research that has decoded baby babbling. As both a parent and therapist, I recognize the immense value of understanding human behavior and development. Any explanation of why kids do what they do feels like gold, but especially for those of us deep in the weeds. So when I heard these child development specialists explaining why babies make certain sounds and how those sounds elicit certain responses from parents, my ears pricked up. And when the podcast went on to uncover that not only are babies affected by the feedback loop of their caregiver but that the caregiver is equally impacted by their baby, I was enthralled.

Something I regularly address in my work with families is how to break this common cycle: child behavior elicits a negative parent response thereby amplifying said child’s less-than-desirable behavior. What happens, however, when the parent decodes that behavior and responds to their child’s emotional needs first? The answer: attunement. The child learns how to express difficult emotions. The parent learns how to read their child’s behaviors for cues and build a bond.

Here’s a case example of how I might guide a parent in building such a bond (names and events are composites of several clients to protect identities):

Tommy (7 y/o) doesn’t want to come into my office. Mom coaxes him in.  Tommy keeps his face down, eyes averted. Mom scolds Tommy, telling him: “Be polite. Dr. Rachel wants to talk to you.” They sit side-by-side on my couch. Tommy folds himself into his mother. “You have to sit up straight,”  she tells him. Tommy puts his feet on her lap, as if trying to disappear into her. Mom gets ready to move his feet off her lap, forcing him to sit up, when I intervene.

“I don’t know what’s wrong with him,” she says with irritation. Mom’s face is turning red and her breathing is getting more shallow as the muscles in her neck tighten. Tommy meanwhile has moved off the couch and is now hiding behind it and has begun to grunt.

“It’s okay. We can take our time.” Directing my voice over the couch, “Tommy, it sounds like you’re feeling uncomfortable but you want to keep talking.” The grunts stop. The floor and couch shake with the thud of Tommy’s feet kicking the back of the couch.

I motion to Mom to turn and face the back of the couch, looking at Tommy on the floor behind her. “Cindy, could you try letting Tommy know that whatever he’s feeling, it’s okay.”

I interrupt, “Like we’ve been talking about, Cindy, stay with the feeling. Let Tommy know that you understand his feelings.”

“Tommy, I see that you’re angry. I hope we can talk about it with Rachel,” Cindy says in a calmer voice. The kicking stops; the room is quiet.

Tommy’s voice from behind the couch, “I didn’t want to come here.”

Mom replies quietly, “I know.” Mom reaches down to grasp Tommy’s hand from behind the couch. “I know,” she repeats.

In this simple exchange, Cindy, initially embarrassed and flustered by Tommy’s defiance, reacted sternly. She tried to demand different behavior from her son who then grew more dysregulated. However, when Cindy attuned to Tommy’s feelings and demonstrated that she understood them, Tommy experienced validation (not to be confused with condoning). In doing so, the need to escalate the emotional expression dissipated and Tommy began to relax into reconnection with his mom.

What I was guiding in this exchange between mother and son is a means of tuning into a child’s emotional needs rather than straying into the weeds of negative behavior. By validating the feeling, a child’s behavioral attempts to communicate need are decoded by the parent, allowing the child to feel safe and discuss what prompted the feeling and/or problem solve. Failure to validate the emotion leaves the child flailing on his own, often increasing the emotion’s intensity along with the child feeling unsafe.

In this kind of exchange, Tommy and Mom are both learning and growing from each other. Just as Tommy’s kicking stopped and his grunts turned into words, Cindy’s voice slowed down and softened along with her upper body muscles. Had they both been wearing heart monitors, I’m sure their heart rates would have shown to have quieted as well. Their bodies and minds are mutually impacted by the attunement and attachment they are learning to have in their parent-child dynamic.